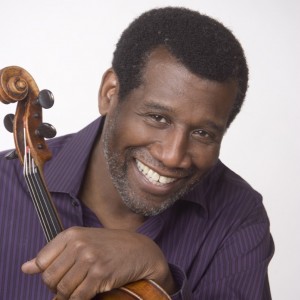 A brilliant violist who has been heralded for “major mastery of his instrument” and called “the complete interpreter,” Marcus Thompson is indeed a remarkable violist.

Since his exciting and heralded New York debut at Carnegie Hall in 1968, Mr. Thompson has continued to delight audiences with his wide breadth of repertoire spanning four centuries on both the viola and viola d’amore as concert soloist, recitalist, and in chamber music.

Mr. Thompson has appeared as soloist with the Chicago Symphony Orchestra, the National Symphony, The Cleveland Orchestra, the St. Louis Symphony, The Atlanta Symphony, the Boston Pops, the Los Angeles Chamber Orchestra, the Chicago Sinfonietta and the Czech National Symphony. In recital, Mr. Thompson has appeared in series at the Metropolitan Museum of Art in New York, the Isabella Stewart Gardener Museum in Boston, Orchestra Hall in Minneapolis, the Terrace Theater at the Kennedy Center in Washington, D.C., Herbst Theater in San Francisco, and at numerous colleges and universities.

His recordings include the standard and the unusual –concertos by Bartok and Penderecki, Hindemith, and that of organist Anthony Newman, commissioned by Mr. Thompson for the 1985 International Viola Congress. He has also recorded a fascinating work by Barry Vercoe “Synapse for Viola and Computer” included in a disc entitled “Computer Generations,” and the premiere recording of Frank Martin’s Sonata da Chiesa for Viola d’Amore and Strings. A recording, released last season, with Paul Freeman and the Czech National Symphony, contains rarely heard works by Joseph Jongen, Jean Francaix, and Tibor Serly. His recordings with the Boston Chamber Music Society include Octets by Enesco and Mendelssohn, Trios with clarinet and piano by Mozart and Schumann, Sextets by Tchaikovsky and Schoenberg, and works by Brahms.

Among several career highlights have been a performance of the Mozart Sinfonia Concertante with violinist Yehudi Menuhin and the Chicago Symphony Orchestra, a performance of the Hindmith Viola d’Amore Concerto Kammermusik 6 with the Philadelphia Orchestra under Charles Dutoit during the Hindemith Centennial at Saratoga, and performances with the Chamber Music Society of Lincoln Center on ‘Live from Lincoln Center’ and at a Presidential Inaugural Concert at the Kennedy Center in Washington, D.C. To mark the Hindemith Centenary, Mr. Thompson performed a recital of the Complete Sonatas for Viola and Piano, Viola d’Amore and piano in Boston’s Jordan Hall with pianist Judith Gordon.

In addition to his busy performing career, Mr. Thompson serves as a member of the Viola Faculty at New England Conservatory of Music, and as the Robert R. Taylor Professor of Music and a Margaret MacVicar Faculty Fellow at the Massachusetts Institute of Technology, where he founded performance programs in private studies and chamber music.