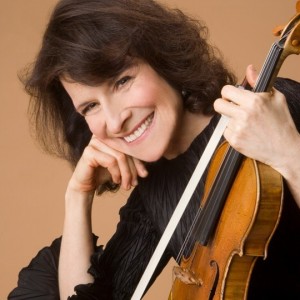 Violinist LINDA ROSENTHAL performs throughout North America, Europe and Asia in recitals, as a soloist with orchestra and as a chamber musician. Based in Juneau Alaska, Linda has also performed in virtually every corner that great State, from fishing villages and logging camps in Southeast Alaska to remote villages above the Arctic Circle. Linda is the Founder and Artistic Director of both Juneau Jazz & Classics, an annual music festival that brings world-renowned jazz and classical artists to perform and teach in Juneau each May, and the Lake Placid Chamber Music Seminar in Lake Placid, New York.

In addition to a busy schedule performing solo and chamber music, Linda also tours Strings & Stories, a show for young audiences that she created and premiered at the Kennedy Center in 1995. Since its debut, Ms. Rosenthal and Los Angeles actor Bill Blush have toured Strings & Stories annually under the auspices of The Piatigorsky Foundation. Their show has reached thousands of children in schools, museums, libraries and community centers throughout the United States.

Over the past decade, Ms. Rosenthal has commissioned and premiered more than a dozen works, including pieces for solo violin, electric violin, violin and piano and violin and narrator. Her most recent commission was Glacier Blue, a Concerto for Solo Violin and Jazz Big Band. Her four solo CDs feature the sonatas of Copland, Piston and Porter; Favorite Violin Encores; Fiddle de Bop, a collection of Americana music for violin and piano; and, Glacier Blue with Bruce Paulson’s L.A. Allstar Big Band.

Ms. Rosenthal plays on a violin made in Turin, Italy in 1772 by J. B. Guadagnini.