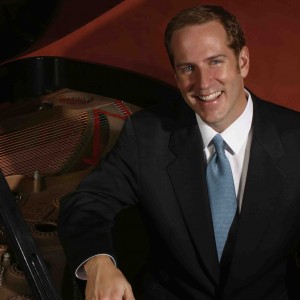 Hailed by The New York Times as “an especially impressive fine pianist,” Richard Dowling appears regularly across the United States in solo recitals, at chamber music and jazz/ragtime festivals, and as a guest soloist in concerto performances with orchestras. He has been acclaimed by audiences for his elegant and exciting style of playing which earns him frequent return engagements. An artist of international stature, Mr. Dowling has presented solo recitals in South America, the Far East, Australia, Africa, and Europe. Career highlights include a sold-out New York orchestral debut at Lincoln Center’s Alice Tully Hall, a solo recital at Carnegie’s Weill Recital Hall in New York, and a special award from the National Federation of Music Clubs recognizing his outstanding performances of American music. In the United States he has received nationwide attention for recitals seen on the PBS television program Debut, and heard on the NPR radio program Performance Today. In New York Mr. Dowling has performed in Central Park with orchestra, and in recitals at Lincoln Center’s Damrosch Park, the 92nd Street Y, Steinway Hall, The Kosciuszko Foundation, The Liederkranz Foundation, Trinity Church, St. Bartholomew’s Church, The Metropolitan Museum of Art, The Metropolitan Club, The Dahesh Museum, The Tenri Cultural Institute, Christie’s, 54 Below, The Rainbow Room at Rockefeller Center, The Brooklyn Conservatory, and Concordia College. Works of Chopin, Debussy, Ravel, Gershwin, and American ragtime figure prominently in his repertoire.

Mr. Dowling is also a versatile recording artist with over a dozen CDs of classical, chamber, ragtime, jazz, and popular music. In 1998 Dowling celebrated the centennial of the birth of George Gershwin by performing his complete solo and orchestral works for piano, including the familiar Rhapsody in Blue and Concerto in F, and the rarely‑heard Second Rhapsody and Variations on “I Got Rhythm.” In 2001 he released Sweet and Low‑Down, a compact disc containing virtually all of the solo piano works by Gershwin on the Klavier Records label. Included on the recording are several world premieres of newly‑available Gershwin material and a few of Mr. Dowling’s own transcriptions and arrangements. American Record Guide wrote of the recording, “Dowling dances through 29 Gershwin numbers with exuberance and a natural feel for rubato…if you love Gershwin, don’t miss this!” In a review of his 2004 World’s Greatest Piano Rags album another ARG critic said that “Dowling plays with tremendous zip and zest…I am sure he is the best ragtime pianist I have ever heard.” His third Klavier recording, Rhapsody in Ragtime, a compilation of Mr. Dowling’s favorite ragtime, novelty, stride and early jazz piano solos was released in early 2007. All three of these popular recordings are heard regularly on radio stations across America. He has also recorded two classical CDs of solo piano works by Chopin, three CDs of cello and piano works with cellist Evan Drachman, and a three-CD set of popular easy‑listening songs called A Perfect Moment. His most recent recordings include Music of Old New York, which features songs and piano rags inspired by The Big Apple at the turn of the century, and Gershwin for Two Pianos, a Rivermont Records production featuring Rhapsody in Blue and other beloved Gershwin works with fellow pianist Frederick Hodges. Mr. Dowling will soon release a 3-CD set of the complete solo piano works (54 rags, waltzes, and marches) of Scott Joplin, the renowned American ragtime composer, in commemoration of the 100th anniversary of the composer's death in 2017. Mr. Dowling will perform the complete piano works of Scott Joplin in two consecutive recitals in Weill Recital Hall at Carnegie Hall on Saturday afternoon and evening, April 1, 2017, exactly 100 years to the day Joplin died in New York. Mr. Dowling will be the first pianist in history to perform the complete cycle of Joplin's piano works in public. He will perform all-Joplin recitals nationwide throughout 2017.

Mr. Dowling has established himself internationally with performances in China, Hong Kong, Singapore, Malaysia, Australia, South Africa, Mexico, Ecuador, Germany, Austria, Italy, and France. In 1994 he was one of only two Americans chosen to perform before massive audiences in stadiums in Shanghai and Nanjing, China. In 1995 he was invited to give master classes at the Academy for Performing Arts in Hong Kong. In 1997 he performed a critically‑acclaimed recital in Singapore at Victoria Concert Hall, and presented master classes at LaSalle‑SIA College of the Arts and the Young Musicians’ Society in Singapore. In 1998 he performed six recitals in Singapore and Kuala Lumpur, Malaysia, including a performance honoring the new American ambassador to Singapore. He has received glowing reviews that praise him as “a master of creating beautiful sounds with impeccable control of colors and textures,” as “a musician with something to say, the skill to say it and the magnetic power to make you want to listen” and for giving “a superb recital that left the audience craving for more at the end.”

Mr. Dowling has long felt a special affinity for French music, art and culture. He studied there at the Conservatoire in Nice, received the Grand Prix from the French Piano Institute, and made his formal recital debut in Paris at the Salle Cortot. He has performed many recitals in churches, private châteaux and at summer festivals. His repertoire includes the complete solo piano works of the renowned French composer Maurice Ravel. In addition to his career as a concert pianist, Mr. Dowling works an editor for Ludwig/Masters Music Publications and Alfred Music Publishing for whom he has produced critical performing editions of piano and chamber works by Confrey, Debussy, Fauré, Gershwin, Hummel, Mendelssohn, and Ravel (including Ravel’s Piano Trio). In recognition of his dedication to France and French musical art, Mr. Dowling was inducted as a Chevalier of the renowned Company of Musketeers of Armagnac (an honor society founded in the 17th century by D’Artagnan). He is one of only a few Americans ever granted that distinction.

A native Texan, Richard Dowling began his piano studies at age five in Houston and his extraordinary musical talent quickly became evident. He gave his first recital at six and won prizes in many piano competitions throughout childhood. He studied privately in high school with pianist Madge Waterston Hunt and made his orchestral debut in a Beethoven concerto performance with the Fort Worth Chamber Orchestra at age eighteen. He received his bachelor’s degree summa cum laude from the Moores School of Music at the University of Houston as a student of pianists Ruth Tomfohrde and Abbey Simon. While at UH he received many performance and academic awards, including a full scholarship from the UH Alumni Association. As a freshman he won first prize in the annual schoolwide UH Concerto Competition, and as a senior was declared National Winner of the prestigious MTNA Collegiate Artist Competition at its national convention. Subsequently, he earned a master’s degree at Yale University where he was honored with the Lockwood Award for performing the best solo recital and the Simonds Award for outstanding solo and ensemble playing, and a Doctor of Musical Arts degree from The University of Texas at Austin where he was awarded a graduate school full fellowship.

Recent orchestral engagements include performances of the Rachmaninoff Piano Concerto No. 2 with the Bozeman (MT) Symphony, the Gershwin Concerto in F with the Wyoming Symphony and Tennessee Philharmonic, the Beethoven "Emperor" Concerto with the Lawton Philharmonic, and the Chopin Concerto No. 2 with the Ridgefield (CT) Symphony and the Cypress/Grand Symphony (TX). He recently appeared with the Dayton Philharmonic (OH) in a performance of the rarely-heard Moszkowski Piano Concerto in E Major (subsequently broadcast on NPR), with the Deerfield Beach Symphony in performances of Saint-Saëns’ Piano Concertos No. 2 & 4, and with the Sun Valley Summer Symphony in a performance of Gershwin’s I Got Rhythm Variations (lead by the late Cincinnati Pops director Erich Kunzel). Mr. Dowling has also appeared as guest concerto soloist at the Texas Music Festival in performances of Mozart’s Piano Concerto in A Major, K. 488 and Ravel's Concerto in G with the Texas Festival Orchestra. In August 2009 he performed in New York as soloist with the Ensemble du Monde chamber orchestra in a performance of Beethoven’s Concerto No. 3 for the Beethoven Festival held at Merkin Concert Hall. Recent and upcoming solo recital engagements include appearances in Lewes (Delaware), Newnan (Georgia), Memphis (Tennessee), Monroe & New Orleans (Louisiana), Tulsa (Oklahoma), Davenport (Iowa), Fairfax (Virginia), Miami, Miami Beach, Coral Gables, and Fort Lauderdale (Florida), Houston, Austin, San Antonio & Wichita Falls (Texas), New York City, Philadelphia, Cincinnati, Indianapolis, Kansas City, Washington DC, San Miguel de Allende (Mexico), and Pau & Lectoure (France). Mr. Dowling has appeared as a guest artist at the Scott Joplin Ragtime Festival, the West Coast Ragtime Festival, the Charles H. Templeton Ragtime & Jazz Festival, the Kansas City Ragtime Revelry, the Indiana Classic Ragtime Society Festival, the Ragtime for Tulsa Festival, the Northern Virginia Ragtime Society, the Cape Cod Ragtime Festival, and the Eagles & Ivories Ragtime Festival.

Since joining the foundation's artist roster in 1994, Richard Dowling has performed well over 1,000 concerts across America as a soloist and in collaboration with cellist Evan Drachman and other Piatigorsky Artists. Between concert tours Mr. Dowling resides in New York. He is a Steinway Artist and is represented by Parker Artists in New York (www.parkerartists.com/Richard-Dowling.html). Visit his website at www.richard-dowling.com.